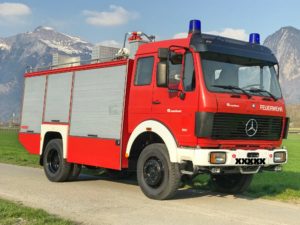 The “New Generation” NG (73) launched in 1973 was a completely new design with a completely new appearance. The first models to be released were construction site vehicles, followed in 1974 by a version with a 600mm longer sleeper cabin. As of 1977, three cab variants were available: a short cab (S-Fahrerhaus), a medium cab (M-Fahrerhaus) with narrow rear side windows, and what then was called the Fernverkehrskabine or L-Fahrerhaus, a larger sleeper cabin with two cots. As well as several custom sized crew cabs (Doppelkabine Doka) for fire and government services.

Starting in 1980, Mercedes offered the NG (80) trucks with a new range of newer engines from 95kW/130hp to 276kW/375hp. This generation can be recognized by wind deflectors fitted to the lower front corners of the cabs. In addition, the horizontal chrome bar on the grill was dropped.

The third and last minor change was introduced in 1985, NG (85). This was the first version available with the newly introduced electronic power shift (EPS), a computer-aided shift support offered as standard on the 1644 flagship model. EPS was initially offered as an option for the smaller engines and was not available for site vehicles. Mercedes expanded the range of engines by a new top option, the OM 442LA (L=Intercooler / A=turbo), a 320kW/435hp V8 with turbo charger and intercooler with 14.6 liters of displacement. The same block was available as the 257kW (350hp) OM442A without the intercooler. Otherwise, the engines remained mostly unchanged. The NG85 could be recognized by its smaller, square model badges with silver lettering. The dashboard received more modern-looking rocker switches instead of the previous push buttons. The NG 85 is very likely utilized as an expedition truck and will therefore be referred to as “NG”. 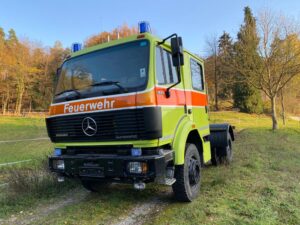 The trucks of the Mercedes-Benz series Schwere Klasse (SK, for “heavy class”) were produced from 1989 through 1998, when they were succeeded by the new MB Actros truck. The Mercedes Benz SK in essence is basically a revamped Mercedes Benz NG chassis with a few added driver comforts and electronic assistance and diagnosis. Therefore, it is more comfortable ride than its predecessor.

In 1994 the SK (2) series, which apart from the upgraded engines was still based on the NG series from 1973, was facelifted for the last time with a new front design.

The SK2 version with an OM442LA is probably the most respected and wanted, therefore most expensive, truck within the NG/SK series.

Of course, for converting a NG/SK truck to an expedition truck, you probably want to look for the 4-wheel drive version (AK=AWD Commercial or AF=AWD Fire Service) with differential locks and hi/lo gearing. There are regular manual transmissions, “double-H” shift transmissions (ZF) and automatic transmissions (Allison and ZF).

Why are we utilizing a “used” truck?

We consciously choose used all-wheel truck chassis from Mercedes Benz without extravagant motor electronics. The technology is comprehendible even for ambitious professionals. Furthermore, the vehicles can be maintained and repaired all over the world. The engines were build-in multiple trucks which were distributed throughout the world for commercial, military, or firetrucks use.

What if I need Mercedes spare parts in the future?

No matter where your adventure will take you, you will most likely find a mechanic who once worked on a Mercedes Benz truck. With an enormous distribution network, Mercedes Benz is capable of rapidly supporting facilities with spare parts in case this is necessary. We have close to every Mercedes Benz spare part ready and available to ship anywhere in the world within 5 days.

The Mercedes Benz trucks chosen as our Base Trucks are equipped with engines which can utilize heavy sulfate diesel. This lower-rated diesel fuel is still distributed in Africa and some parts of South America. A modern, electronically modified engine will have difficulties using this kind of fuel.

These firetrucks usually come with all-wheel-drive as well as differential locks at the back axle and between front and back axle. Some of the firetrucks have differential locks on the front axle as well. Whereas some all wheel drives are permanent, others can be switched between 2WD and 4WD
Firetrucks come with a longer axle ratio, compared to regular trucks, and in combination with the single wheels these trucks reach 105 to 120km/h (65 to 75mph), allowing highway travelling to be comfortable. At the same time they do have a gear reduction for heavy terrain. Firetrucks are meticulously maintained.

What other advantages do they have?

Another important advantage is these firetrucks usually come with less than 50,000km (30,000miles) and are meticulously maintained.
Nevertheless, on top of all these advantages, they are cheaper anyway!